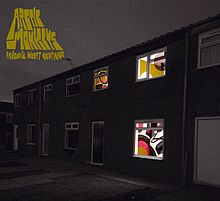 Favourite Worst Nightmare is the second studio album by English indie rock band Arctic Monkeys that was first released in Japan on 18 April 2007 before being released around the world. Recorded in east London’s Miloco Studios with producers James Ford and Mike Crossey, the album was preceded by the release of “Brianstorm” on 16 April 2007. In its first week following release the album sold over 220,000 copies, emulating Whatever People Say I Am, That’s What I’m Not in going straight to number one in the UK Albums Chart, albeit selling 100,000 copies fewer than their record-breaking debut. Favourite Worst Nightmare’s first day sales of 85,000 outsold the rest of the Top 20 combined, while all twelve tracks from the album entered the top 200 of the UK Singles Chart in their own right. In the USA, the album debuted at number seven, selling around 44,000 copies in its first week. The album has since gone 2X platinum in the UK and the album was nominated for the 2007 Mercury Prize. At the 2008 BRIT Awards it won ‘Best British Album’.