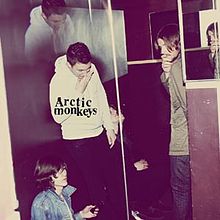 Humbug is the third studio album by English indie rock[1][2] band Arctic Monkeys, first released on 19 August 2009 by Domino Records. The band started to write songs for the album towards the end of summer 2008, and finished it entirely on spring 2009.
Like their last release, Favourite Worst Nightmare (2007), Humbug was released first in Japan, on 19 August 2009, followed by Australia, Brazil, Ireland and Germany, on 21 August 2009. It was then released in the UK on 24 August 2009, in the US the following day and in Greece on 31 August. The release preceded the band’s headline performances at the Reading and Leeds Festivals at the end of that week.