Suck It and See 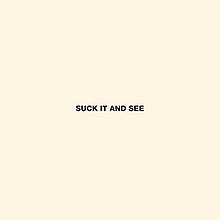 Suck It and See is the fourth studio album by English indie rock band Arctic Monkeys, released 6 June 2011 in the UK and 7 June in the US, following their 2011 North American tour. The band worked with producer James Ford on this album and promised a more “vintage” style. The music video for “Brick by Brick” was released shortly before the album details were revealed on March 10. Drummer Matt Helders, however, confirmed that “Brick by Brick” will not be the lead single. On 19 March 2011, in an interview with NME, Helders revealed that Suck It and See will feature “some songs a bit more instant. A bit more poppy, certainly, than Humbug was.”

It was revealed on 30 March that three thousand vinyl copies of “Don’t Sit Down ‘Cause I’ve Moved Your Chair” would be released worldwide by the band as part of Record Store Day on 16 April. The following day it was confirmed on the band’s official website that the track would be the album’s lead single and that it would be available with B-sides “The Blond-O-Sonic Shimmer Trap” and “I.D.S.T.” from 30 May.

The track “Piledriver Waltz” was first released on Alex Turner’s debut EP, Submarine, where it was credited to Turner as a solo artist. It has been confirmed that the Suck It and See version would be a re-recording with the whole band involved.
On 25 August a teaser trailer for the Don Valley show DVD was released, it is unknown when it will be released.
Non-album song, “R U Mine?” is to be released with b-side, “Electricity” on a 7″ record for Record Store Day 2012, signifying there will be no more singles from Suck It and See. It is the first Arctic Monkeys album to have more than 3 singles released from it.